Euglena – One Unique Microalgae that Enhances Immunity in Multiple Ways

Euglena – One Unique Microalgae that Enhances Immunity in Multiple Ways

Every day, there are billions of flu-causing viruses and other microbes crawling and creeping around us. They are constantly looking for the perfect opportunity to invade our body and devour our health or even lives. According to the Centers for Disease Control and Prevention (CDC), it is estimated that influenza has resulted in between 12,000 – 61,000 deaths every year since 2010.

Although the current atmosphere is frightful, our body is actually created with the power to ward off colds, flu and infections. When our immunity is stimulated and supported with the right nutrients, the different soldiers of the immune system will be super-charged to detect and kill diseases-causing microbes.

HOW DOES OUR IMMUNE SYSTEM WORK TO KILL BACTERIA AND VIRUSES?

Our immune system is a complex and pervasive system with main aim of fighting against infections and illnesses. It comprises of different types of cells carrying out their specific duties with their own unique ways of communicating among the immune cells and other cells through signalling, identifying pathogens with their special detecting mechanisms and getting rid of them.

Our immune functions can be grouped into 2 main strategies as below.

The innate immunity: These “inborn” or “built-in” immune responses, forming the first line of defence, include:

The adaptive immunity: The slower yet highly-specific immune responses of this system, forming the second line of defence, create precise immunological memories upon the first encounters of different pathogens so that the subsequent attacks by the same pathogens will not be successful in causing illnesses. Hence, it is also known as the “acquired” immune system. 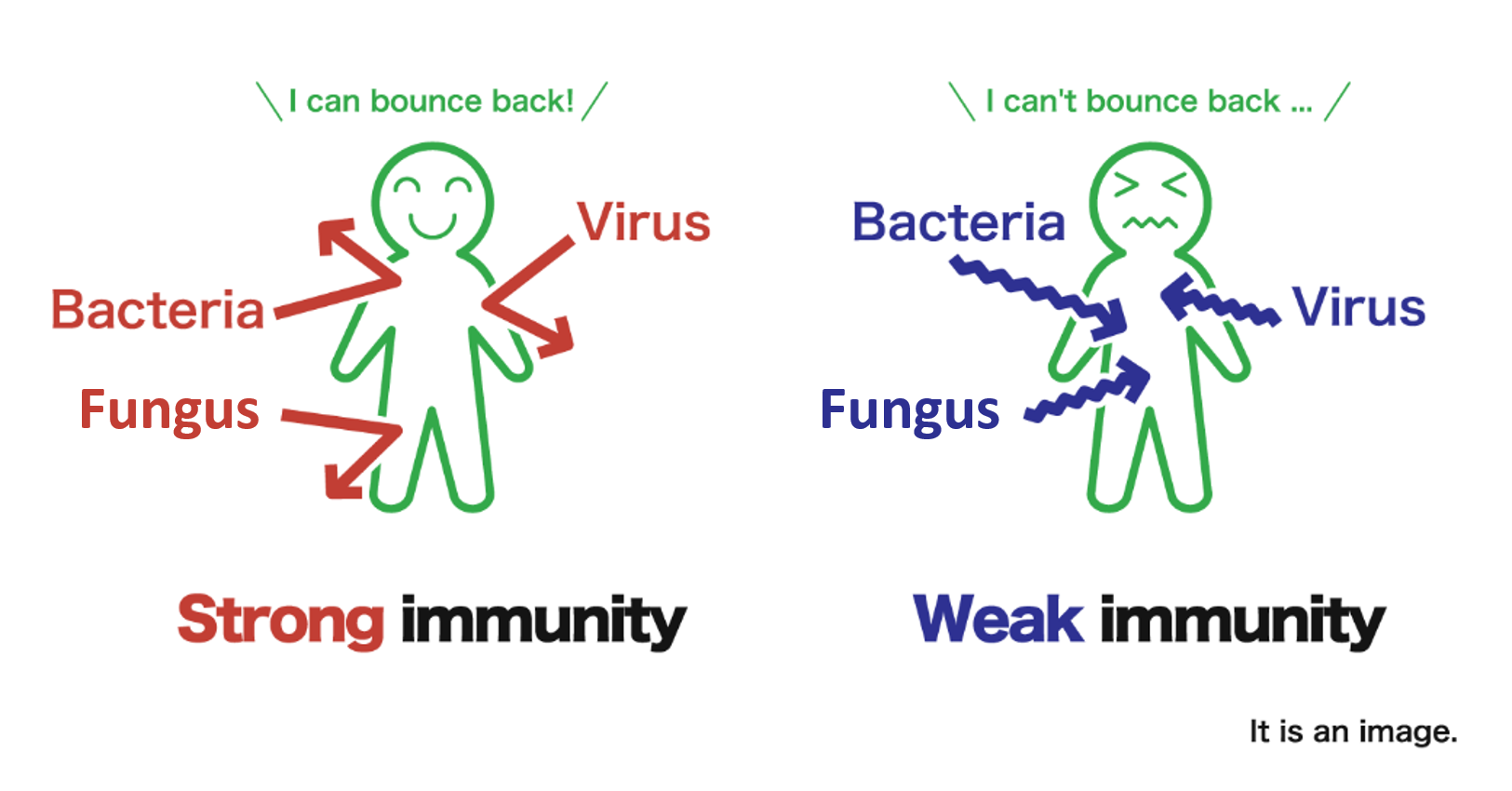 Upon infection with a virus, both innate and adaptive immune responses are involved in controlling the infection. Ensuring intake of adequate essential nutrients is important in improving the ability of our innate immunity in detecting and eradicating viruses timely. Since there is no lifelong protection against viral infections and the threat of possible future pandemics, our optimal nutritional status is crucial in combating any new viruses.

PARAMYLON – THE UNIQUE FACTOR IN EUGLENA

Euglena is a species of microalgae that is capable in supporting and activating our body’s own immune response to fend off invading bacteria or viruses. Growing in fresh and marine water, they are green in colour as they contain chlorophyll which allow them to carry out photosynthesis to make nutrients. Let’s delve into the ways that this unique microalgae takes to enhance body’s immunity!

Paramylon is a bioactive ingredient found only in Euglena. It is a soluble fibre belonging to the Beta-glucan class of compound. Euglena can accumulate large amounts of the unique Paramylon as granules in the microalgae up to 95% of the cell mass.1,2

Euglena and its Paramylon content have the potential to boost both the innate and adaptive immunity.

When Paramylon reaches the intestine upon ingestion, it encounters immune cells present in the intestine. The shape of paramylon is very similar to that of bacteria. Therefore, it is recognised as a foreign substance by the immune system’s control tower, which sends a signal to the other immune cells to start preparing for a fight. Due to this primary immune reaction triggered by Paramylon, the immune cells are prepared and can protect the body with ease when actual pathogens enter the body.

EUGLENA BUILDS A STRONG FORTRESS IN OUR GUT

In March 2020, Prof Adachi of Tokyo Medical & Dental University found that Euglena enhanced the Peyer's Patches and increased the activities of the immune cells in our intestine.3

Peyer's Patches decline rapidly with age so this finding offers a valuable insight into how to we can maintain a youthful and robust immunity.3

Besides that, being a beta-glucan compound, Paramylon contributes to gut health by serving as prebiotics - food for the probiotics - in the gut, enhancing the healthy growth of probiotics. The good gut bacteria feeds on Paramylon by means of fermentation and releases immune-modulating short-chain fatty acids (SCFA). The increased acidity in the gut caused by SCFA will turn the gut environment unfavourable for the growth of bad bacteria.4

Inflammation is one of the ways our body activates the immune system. However, inflammation must also be controlled to limit damage to the body.

Euglena helps to regulate immune balance which prevents the development of diseases caused by imbalances in the immune system.5

Euglena has been found to stimulates inflammatory factors to activate a specialised family of immune cells, known as lymphocytes.5

At the same time, studies have found it helps to lower inflammation in the lungs of influenza virus-infected subjects. Coupled with its ability to lower virus load, this increased the survival rate.5

Interestingly, taking Euglena with vegetables have been shown to enhance the anti-inflammatory effects.6

The immune system is one of our body’s main defences against cancer.

Natural killer (NK) cells are immune cells that identify and eliminate abnormal cells, including tumour cells and cells that are developing into cancer cells.

Paramylon augments the activity of natural killer and other immune cells, helping to rid the body of abnormal cells before they can do more damage.

On top of that, being a soluble fibre, Paramylon may play a role in colon cancer prevention as they help to maintain bowel health by speeding up the rate at which undigested food moves through the digestive tract.4 Also, paramylon is able to bind to cancer-causing chemicals and reduce their absorption from the intestinal tract.4

Moreover, the reduced inflammatory response and increased gut acidity through the fermentation of Paramylon by the gut probiotics may curb the growth of cancer-causing microbes in the gut.4

A good nutritional status is crucial for strong and optimal immune responses.

Euglena is able to improve the nutritional status as it offers the complete 59 essential nutrients, including antioxidants, needed by our body for good health and optimal body repair.

Euglena is the only species of microalgae whose cells have a cell membrane instead of a cell wall. This allows our body to fully digest and absorb the nutrients present. Studies have shown a digestive rate of 93.1%.7

Recent studies have shown that consumption of Euglena brings about the following health benefits:

Euglena can be a convenient food or nutritional supplement that effectively supports immunity.

Strengthen your immunity and defend your body against infections, colds and flu with the science-based superfood, Euglena.