Elevated blood levels of uric acid are present in about 21% of Americans.1

People frequently associate high uric acid levels with gout, yet many symptom-free individuals have elevated uric acid for years before getting their first gout attack.2

Gout is not the only manifestation of elevated uric acid blood levels. When uric acid levels are higher than optimal, there’s also an increased risk of coronary artery disease, cerebrovascular disease, and early mortality.3-6

While mainstream medicine offers drugs that reduce uric acid levels, they are primarily restricted to those who have already been diagnosed with gout.10,11

In this article, you will learn about a tannin-rich fruit that was shown in a controlled human trial to safely reduce uric acid to healthy target levels in 88.8% of study subjects.8 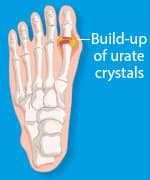 Excess levels of organic compounds known as purines break down into uric acid—a waste product excreted through urine. When excess levels of uric acid build up in the blood, a person is diagnosed with hyperuricemia.12,13

About 5% to 8% of adult males have asymptomatic hyperuricemia.8,16,17 Uric acid levels above 8.6 mg/dL in men or 7.1 mg/dL in women are classified as hyperuricemia (although some laboratories and research groups use different limits).18,19

A long-term buildup of uric acid results in solid deposits of a salt called monosodium urate monohydrate—forming needlelike crystals in the joints, soft tissue, and organs throughout the body.13

Affecting millions of Americans, this can lead to the arthritic inflammation behind painful attacks of gout and other diseases related to high uric acid.1,20-22 When the serum uric acid level exceeds 9.0 mg/dL, the probability of developing clinical gout is 6 times higher.8,16,17

Aside from pain so excruciating that some sufferers cringe at the thought of putting a sheet over their foot at night, gout is associated with higher risks of cardiovascular disease and mortality.1,23,24

Gout is best known for causing pain focused in the big toe. However, gout can also attack the:2

A recent study found that 52% of individuals with asymptomatic hyperuricemia and 68% of gout patients also have knee osteoarthritis.25

A gout attack can be triggered at any time by a range of factors, including alcohol, certain medicines, other illnesses, or stress.1,26,27 Those whose uric acid is increasing due to age and other factors need to take action to reduce these levels long before they suffer their first gout attack—to help prevent damage to joints, soft tissue, and organs, or even the onset of cardiovascular or kidney disease.

Scientists have long sought alternative interventions that would effectively inhibit excess uric acid levels. This investigation has been driven by the fact that drug options that reduce those levels are primarily prescribed only for those whose hyperuricemia has progressed for years to eventually become diagnosed gout.11

For example, the manufacturer of the uric acid-reducing drug febuxostat stipulates that this potentially risky drug is “…used to lower blood uric acid levels in adults with gout” and that “… it is not for the treatment of high uric acid without a history of gout.”10 Even if these drugs were freely available to hyperuricemic individuals, however, there would be a need for a safer intervention.

One of the most common side effects of the gout medication febuxostat is liver problems. But the drug’s manufacturer advises that, “A small number of heart attacks, strokes, and heart-related deaths were seen in clinical studies.” Other common adverse effects include nausea, rash, and—ironically—joint pain and gout flares.10

Two other drug options, allopurinol and probenecid, have been linked to side effects ranging from skin rash to breathing difficulties and unusual bleeding.28,29 And it was recently found that allopurinol does not always decrease serum uric acid—which is the whole point of taking it and enduring adverse risks.30 Incredibly, some gout medicines can precipitate gout symptoms.13

The drug colchicine is often prescribed for treatment of gout. It has been sold as a low-cost generic since the 19th century in the US—far predating the establishment of the FDA, which in 2009 granted one firm a three-year marketing monopoly on colchicine for the prevention of acute gout flares in return for the firm’s agreement to conduct studies on effectiveness, safety, and dosage. As a result of the government-mandated monopoly, colchicine’s price skyrocketed from nine cents a pill to almost $5 a pill.35

Aside from its cost, colchicine is associated with nausea, abdominal pain, diarrhea, generalized weakness, and even vascular and kidney damage.36

A Natural Alternative for Hyperuricemic Individuals

An enzyme called xanthine oxidase is involved in the body’s production of uric acid.

A natural agent with the power to safely inhibit production of xanthine oxidase would mark a big advance in the quest to reverse high uric acid levels without side effects.

A tree fruit extract has been studied for its ability to inhibit uric acid production in humans.8 An extract of the Terminalia bellerica fruit is rapidly emerging as a natural uric acid lowering nutrient.

The fruit of the Terminalia bellerica tree has been used in Ayurvedic medicine for many years, mainly for removal of kidney stones and decreasing inflammation. The extract being studied is derived from this edible tree fruit that contains 15% tannins.

Research suggested that the bioactive compounds in this Terminalia bellerica fruit provide anti-inflammatory effects, possibly due to inhibition of inducible nitric oxide synthase (iNOS). Researchers have reported this extract’s effectiveness against painful or burning urination, urine discharge, and bleeding in the kidney, and its ability to help remove blocked kidney and urine stones.8,31

Scientists found that this extract, with its potent tannin content, also appeared to inhibit xanthine oxidase—which in turn should decrease uric acid levels.8 The real challenge, however, was whether Terminalia bellerica would prove, in a controlled setting, to be effective in humans who are already hyperuricemic.

How Uric Acid Levels Become Too High in Some Individuals

The body receives purines from two sources. First, it synthesizes its own purines, which are important for the synthesis of nucleic acids, the building blocks of DNA and RNA as well as for neurotransmission. Second, purines come from dietary choices such as meats, poultry, seafood, and beer.

Since the body produces all the purines it needs, purines from food sources result in excess amounts that are converted to uric acid.14 Lifestyle habits can play a role.

Excess uric acid is usually eliminated via urine. However, some individuals have impaired uric acid excretion, which accounts for about 90% of all hyperuricemic cases.15 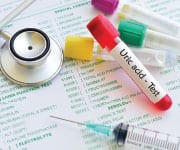 To determine the efficacy and safety of this fruit extract in hyperuricemic humans, scientists designed the most rigorous type of study—a long-term, randomized, double-blind, placebo-controlled human clinical trial, the kind that the FDA mandates before it approves new drugs.

A total of 110 volunteers with hyperuricemia were divided into five groups and evaluated periodically over 24 weeks. Scientists assessed their uric acid levels, other health indicators, and side effects before treatment started and again at four weeks, eight weeks, 12 weeks, 16 weeks, 20 weeks, and 24 weeks of therapy.8 So both efficacy and safety were evaluated at six points during the 24 week-study.

Every visit, patients were questioned about possible adverse effects. At the outset and again at 24 weeks, a lab analysis assessed hematological, hepatic, and renal biochemical parameters. Each participant received a contact number to report any potentially adverse event and to access medical help.8

The five groups of hyperuricemia patients received treatment as follows:8

The study team analyzed the data to directly measure the effectiveness and safety of the two Terminalia extracts relative to each other, the drug, and the placebo. They paid particular attention to the percentage of patients in each group whose uric acid levels were reduced to the healthy target of below 6.0 mg/dL.8

A few lifestyle tips that can help prevent hyperuricemia include:

Researchers found an average reduction in uric acid levels at all six visits for all treatment groups except the placebo group, in which uric acid increased over 24 weeks.8

For the treatment groups, uric acid decreased over 24 weeks by an average of:8

And the percentage of volunteers who attained the uric acid target of 6 mg/dL or less was:8

Researchers were impressed that almost nine out of ten volunteers who took 500 mg of T. bellerica twice daily achieved the target level. All 10 volunteers taking febuxostat did so, but this drug has known and potentially lethal side effects that are difficult to identify in 24 weeks—yet early adverse effects were observed even in this short period.8

All hematological and biochemical parameters were within normal limits at the outset, but of the 18 volunteers on febuxostat, two completed the study with elevated total bilirubin and one complained of nausea and vomiting. (Bilirubin is the yellow byproduct of heme breakdown, and elevated levels can indicate certain diseases.) Also, one subject in the T. chebula group had mild gastrointestinal intolerance.8

Most significantly, not one volunteer taking T. bellerica had any adverse effect at all,8 which is in line with prior research showing no toxicity in rats given massive doses of T. bellerica, ranging from 300 mg to 5,000 mg per kilogram of body weight.32,33

Critically, this natural extract is available without prescription to gout sufferers and anyone wishing to lower uric acid levels before gout develops. By contrast, the febuxostat manufacturer stipulates that this risky drug “…is not for the treatment of high uric acid without a history of gout.”10

Scientists conducted a well-designed, 24-week, randomized, double blind, placebo-controlled, parallel-group study to assess the efficacy and safety profile of Terminalia bellerica in reducing high uric acid levels.8 Twice-daily dosages of 500 mg of T. bellerica reduced serum uric acid levels by a mean of 27.59%—allowing 88.8% of those with hyperuricemia to attain the target uric acid level of 6 mg/dL,8 without any of the side effects observed in gout patients taking febuxostat.10 The manufacturer of febuxostat does not endorse its use in hyperuricemia patients who have not yet progressed to having gout.10

High levels of uric acid can damage joints, soft tissue, and organs, and boost the risk of kidney, coronary artery, and cerebrovascular diseases.

Drug options to reduce uric acid levels are primarily reserved for those with full-blown gout—leaving hyperuricemic individuals without easy options.

Terminalia bellerica is a tannin-rich extract that appears to inhibit xanthine oxidase, an enzyme involved in uric acid synthesis.

In volunteers with elevated uric acid levels, twice-daily capsules of 500 mg of T. bellerica enabled nearly nine out of 10 people taking the extract to achieve the target level of serum uric acid of under 6 mg/dL, with no adverse side effects.